Parents from the US and around the world are fire walled from children held by estranged spouses – and Japanese parents face similar agonies….

Japanese leaders and diplomats regularly lambast North Korea for the abduction of their citizens by state spies – one of countless human rights abuses committed by Pyongyang.

What is less known is that hundreds of American children have been abducted to Japan in defiance of international conventions, while at home, hundreds of thousands of Japanese children suffer from facto parental kidnappings.

American Randy Collins of Santa Ana, California, is all too familiar with the situation. He last saw his son, Keisuke Christian Collins – then 5-years old – in June 2008.

Only three days after a California court had ruled – for a third time – that his son was “not to be removed from the County of Orange, State of California, or the US,” his ex-wife, Reiko Nakata Greenberg Collins, fled with their son to Japan.

Only in 2015, after he learned the exact whereabouts of his son, did Collins fly to Japan to try to see him. He was unsuccessful.

“The Japanese government flagged my passport upon entry to Japan and advised Reiko I was there. She then ran away (with Keisuke) for the entire time,” Collins told Asia Times.

“When I tried to leave the country, the Yotsukaido police contacted the airline and tried to detain me at the airport. When I asked for what reason, they would not tell me. After I showed the airline employee the phone number of the US Embassy in Tokyo and said that this is my next call, the police finally allowed me to board my flight.”

The Orange County Sheriff’s Department has a warrant for Reiko’s arrest, she is on the FBI’s list for “Parental Kidnappings” and Interpol has her on its “Red Notice” roster.

But Tokyo is silent. 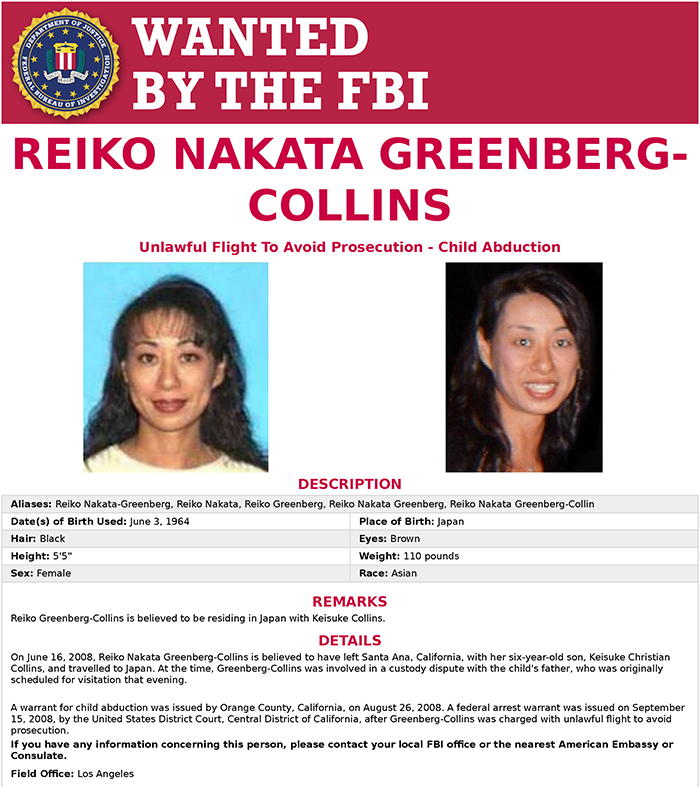 “Even though she is hiding in plain sight, the Japanese government will do nothing. I have not seen or heard from Keisuke in over 10 ½ years. All I have ever wanted is to be able to have a relationship and be a dad for my only child,” Collins said.

“Japan must be held accountable for its disregard of fundamental parental rights and its continued support of these illegal abductions.”

For years, Japan has been one of the most intransigent countries regarding international parental child abductions – which is exactly how the US described Japan during a US Senate hearing in 2014. Tokyo looks particularly dubious in light of the 1980 Hague Convention on the Civil Aspects of International Child Abduction.

“Japan is non-compliant,” with the convention, Collins asserted, citing the abductions of about 400 US children since 1994.

After a February 2018 meeting with US President Donald Trump, Japanese Prime Minister Shinzo Abe said: “There will be no economic assistance for North Korea until it addresses the abduction issue” – a reference to Japanese citizens abducted by North Korea to train its spies.

“I agree with Prime Minister Abe,” said Collins. “And there should be no US economic or military assistance with Japan until Japan addresses the abduction issue. Why should Japan be held to any less of a standard than North Korea? North Korea returned five of those 17 who were abducted nearly 40 years ago. Japan has returned zero.”

“There is a serious flaw in Japan’s implementation of the convention,” said Suzanne Lawrence, a special advisor for children’s issues at the US State Department’s Bureau of Consular Affairs.

“This is unacceptable and I am deeply concerned that, as a result, there is a pattern of Japan not complying with its obligations under the Convention,” Lawrence said while testifying at a recent US government hearing on international child abductions. She added: “I am pleased to report that there is progress.”

Not everyone agrees. In mid-2018, for example, a public seminar took place in Paris organized by Japan’s Ministry of Foreign Affairs and the Japan Federation of Bar Associations. An audio recording obtained by Jeffery Morehouse, executive director of “Bring Abducted Children Home,” formed in 2011, indicated that Tokyo was coaching its citizens about how to abduct their children to Japan and how to prevent their return.

“By creating a seminar that advised potential abductors how to circumvent a (convention-compliant) return order, the government of Japan exhibited a shocking and blatant disregard for this international agreement,” said Morehouse.

Morehouse knows. He was granted sole custody of his 6 ½-year-old son “Mochi” Atomu Imoto Morehouse in the State of Washington in May 2007. In June 2010, he dropped him off for a week-long visit with his mother. That was the last time Morehouse ever saw Mochi.

“Six days later, I received a phone call from the police that no parent wants to receive: My son and ex-wife had been reported missing. I knew immediately what happened. She had kidnapped our son to Japan,” he said. “In that moment, my life was shattered.”

Passport and travel restraints in the court order to bar his ex-wife from leaving the state of Washington with Mochi had proven ineffectual. “When the Seattle Consulate of Japan denied her passport request she simply went to the Japanese consulate in Portland, which issued her one in violation of passport issuance policy,” he said.

Associates sometimes tell Morehouse that at least his son is safe with his mother. He strongly disagrees.

“He is not safe. Imagine being a child and your mother steals you away to a foreign country and then tells you your father does not want you anymore, or that he is dead,” he said. “Your whole life is now built on a foundation of lies. This is not what a healthy, nurturing parent does. It is child abuse.”

Despite winning landmark rulings in Japan in 2014 and 2017, Morehouse alleges “there was no intent to offer justice … it does not matter how a child ends up with the abductor in Japan, they will not uphold laws and treaties to return children to their rightful home. In the end, the court refused to reunite Mochi and me. I do not even know where he is being held.”

As a result, BAC Home emerged as a nonprofit organization dedicated to the return of internationally abducted children – not only American – from Japan. By early 2018, a new organization known as “The G7 Kidnapped to Japan Reunification Project” had united parents and organizations from Canada, France, Germany, Italy, Japan, the UK and the US.

Morehouse noted that many Japanese are deeply ashamed of these abductions. Indeed, it is not only international parents suffering. Due to domestic laws and enforcement – or lack thereof – thousands of Japanese are victimized by estranged partners.

Even when a Japanese parent is granted custody of a child, the other parent often refuses to comply. Police are powerless.

“When a taking parent refuses to comply with a return ordered pursuant to the convention, Japanese authorities have very limited means to enforce the order,” Lawrence, the US expert, conceded.

The problem is huge. “Research of Japanese government statistics from the Ministry of Health, Labor and Welfare indicates that an estimated 150,000 children per year lose access to one of their parents after divorce,”

But questions are being raised. In July 2018, the Yomiuri Shimbun, Japan’s largest newspaper, reported on its front page that Tokyo was considering introducing joint custody to prevent custody battles and actions tantamount to the kidnappings of children by one spouse.

“Many laymen who are foreigners in Japan have a misunderstanding that foreigners are discriminated against, but that is not a comprehensive description of the scenario, Many Japanese married to a Japanese spouse are also affected.”

This, of course, provides no comfort to non-Japanese parents whose children have been abducted. Nor does it excuse Tokyo from international treaty obligations.

“Japanese judges and attorneys representing abductors manipulate the ‘best interest of the child’ to rule that the child should remain alienated and ignore how they ended up with the abducting parent,” Morehouse said. “Japan’s response to the convention is all misdirection.”

In Japan, Asia Times attempted to reach the Japanese parents in this story with phone calls and a visit to the last known address of one parent. There was no response at press-time.

When Asia Times attempted to contact related officials in the Japanese embassy in Washington, the attempt was rejected by the former head of chancery, Takuya Sasayama. He said he had left the embassy, declined to identify his replacement and refused to forward questions to appropriate contacts.

Morehouse testified that it was Sasayama who had informed him that “access depends on the mother and child’s wishes” – which Morehouse describes as a clear violation of the convention.

Meanwhile, what is glaringly absent from the debate are the voices of affected children.

“In the beginning of my most recent legal battle in Japan, my son, who was 13 at the time, was asked by his attorney, ‘Do you ever think about your father?’” Morehouse said. “As tears rolled down his face he replied, ‘Sometimes I dream of him at night’.”