We are for ever contacted by desperate parents who have had their children kidnapped and taken overseas. In all conversations we have with parents includes their ideas on Interpol Arrest Warrants. Why can’t Interpol arrest him/her? What parents do not understand is that this is not a Hollywood movie where police swoop in and arrest the criminals. Firstly, there are different types of arrest warrants that can be issued depending on the individual crime, location and case. This is NOT decided on by Interpol, it’s decided on by the local police force who is in charge of the investigations.

The role of Interpol is as follows: “Our role is to enable police around the world to work together to make the world a safer place. Our high-tech infrastructure of technical and operational support helps meet the growing challenges of fighting crime in the 21st century.”

An Interpol notice is an international alert circulated by Interpol to communicate information about crimes, criminals, and threats by police in a member state (or an authorized international entity) to their counterparts around the world. The information disseminated via notices concerns individuals wanted for serious crimes, missing persons, unidentified bodies, possible threats, prison escapes, and criminals’.

There are eight types of notices, seven of which are colour-coded by their function: Red, Blue, Green, Yellow, Black, Orange, and Purple. The most well-known notice is the Red Notice which is the “closest instrument to an international arrest warrant in use today”. An eighth Special Notice is issued at the request of the United Nations Security Council.

The most commonly used in International Parental Child Abduction cases are the Red and Yellow notices. These notices are only ever issued IF the investigating police force (that would be who you reported the kidnapping to) requests these to be put on. A Yellow Notice is a global alert to help locate missing persons, or to identify persons who are unable to identify themselves. Yellow notices can always be used in IPCA cases. If a kidnapped child then tries to travel and they have a yellow notice, the immigration officers will stop them from travelling, hold them and the person with them until immigration officers contact Interpol about the yellow notice. The Interpol officer who is allocated that specific yellow notice will then make contact with the police force who submitted the yellow notice request to Interpol. Immigration officers will ask the issuing police force what they wish to do. Usually in IPCA cases the child will be held with immigration until the left behind parent arrives to pick them up. The person with the child at the time of being stopped by immigration officers is then usually let go, if there is no Red Notice on them.

The above underlined paragraph is the crucial point victim parents must understand. We have personally sat in the office of the head of Interpol in Cairo Egypt for specific cases where there are Red Notices issued for Egyptian parents who have kidnapped their children to Egypt. We have given Interpol in Cairo exact locations and every possible detail and court orders from the High court in Egypt and everything else they need to make an arrest. Their reply, “Sorry we would love to help, but in Egypt it is not a crime to kidnap your own children into Egypt. Sorry we can not help. If the parent tries to leave Egypt they will be arrested and detained, but we will release them if the issuing country of the Red Notice doesn’t want to come get them.”

We have had a case in Lebanon were a kidnapping father has a Red Notice and the issuing country we are dealing with want him extradited back to face kidnapping charges. One year ago this father was stopped on a random road traffic stop. His details checked and Lebanese police found the Red Notice. He was taken back to the police station. The issuing country started the extradition procedures, but after 48 hours the father was released by Lebanese police!!!! Now he is on the run again. True story and a case we soon will have completed.

Just a couple of examples of how well Red Notices actually work in IPCA cases.

An example of a Red Notice issued for IPCA: 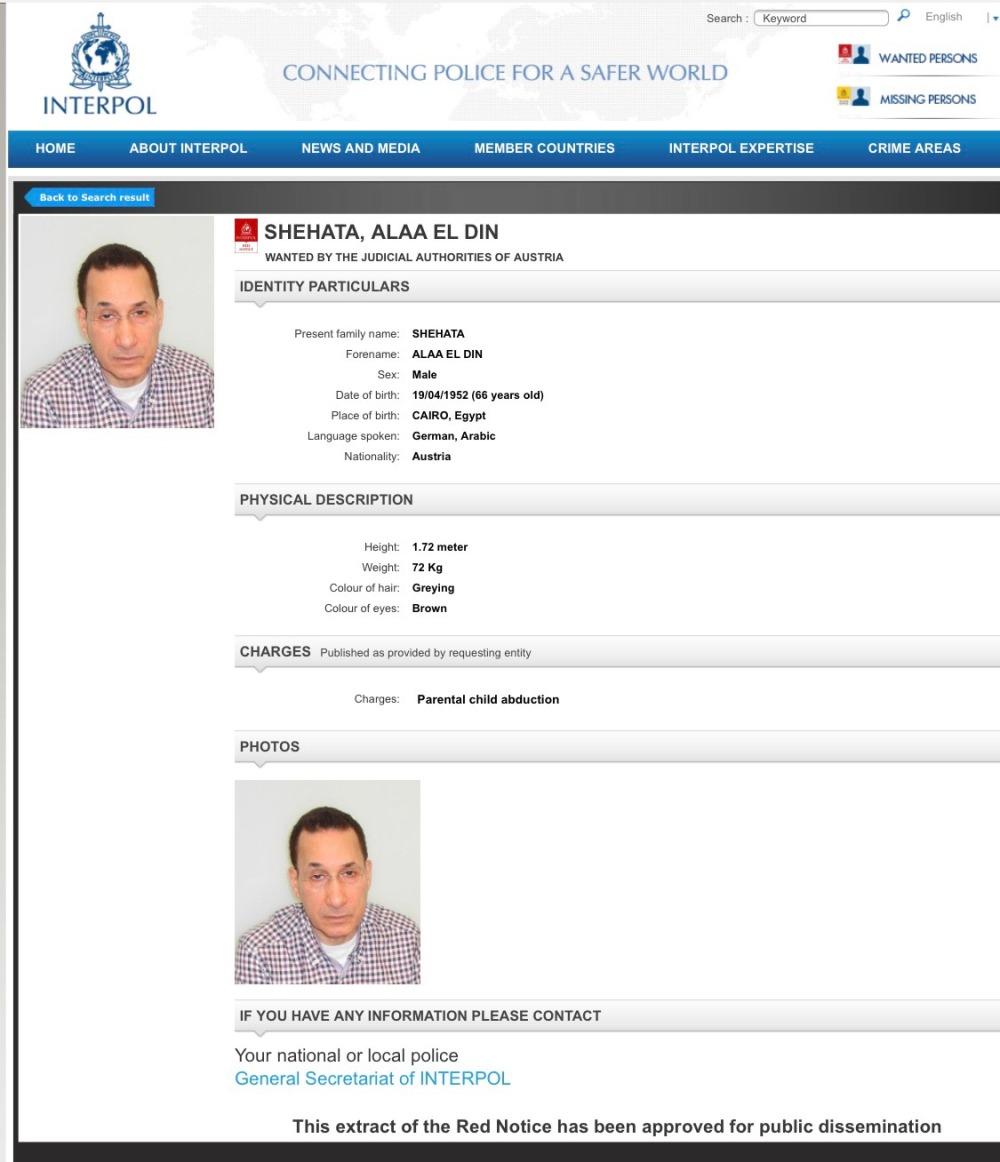 CARI Child Abduction Recovery International has countless cases where we have passed on details to Interpol for a parent who is on their Red Notice list as well as the local authorities where the kidnapper is hiding. Not one kidnapper has ever been arrested through a Interpol warrant. Remember each member country decides for itself what legal value to give a Red Notice within their own borders. We can tell you now that most local authorities do not take IPCA as a serious crime or a crime at all in most countries.

So do we recommend putting on a Red or Yellow notice in your case? The answer is not as easy as you think. There can be positives and negatives in putting these notices on. As an example if a Red Notice is placed on a kidnapping parent you can bet your bottom dollar once they know about it they will never leave their home country, closing any chance of you getting any assistance. Saying that, we have used this tactic in negotiations we have carried out direct with kidnapping parents. We work with the issuing authority and can assist the kidnapper to have any warrant removed if they hand back the children. As we stated every case is different in its own right. We think outside the box in these situations and will use these tools in cases where we get into a negotiation situation after we squeeze the kidnapper into no other solution.

Take a Red Notice for someone who is wanted for murder, it works very good, but in IPCA cases do not think for one minute a Red Notice will help.