Full updates and factual details on the frauds and their associates can be found here: https://childabductionrecovery.wordpress.com/2020/04/05/frauds-parental-child-abduction/

It seems the interest in frauds of the child recovery industry is a very popular subject based on the clients that are increasingly contacting us after being scammed by the same individuals and the search terms on our blog, two of the most popular is “a story that ends with it doesn’t pay to be a liar” and “the fraud squad“.

We can clearly see through our statistics, that even fraud Patrick Desmond loves to search about himself on our blog. Why wouldn’t you, when you’re being exposed for a true scumbag you are. 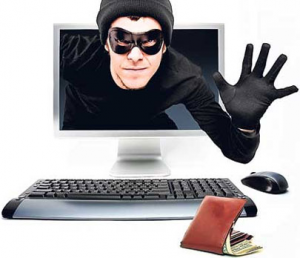 It still amazes us how easily desperate parents are conned out of a lot of money by these individuals and there is nothing to stop them. They continually change their MO with the latest, Mr Patrick John Desmond, taking money and then disappearing stating that he has had a heart attack to his victims, or the 2 French father’s he took tens of thousands of Euros from and then disappeared. Pensioner Desmond has not recovered one single child. Why does he promote himself as a child recovery specialist or why is he in this industry?? Here is a hint €$¥€$¥€$¥

Uses this Facebook page below to scam parents along with #ColChapmanChildRecovery Fraud.

for his scams as well as Child Recovery Europe (CRE),

but no doubt that name will change. He hides in Belgium telling parents his wife is an Embassy official. Another fantasy from this pensioner. When you contact CRE, he calls himself in emails John Wilson or John Williamson and tells parents he has offices in Spain and UK. He started this tactic after his name was exposed. See below… it’s Patrick John Desmond using a fake name.

Not recovered a single child.

We have also been notified by parents Desmond has now joined with Jay Jordan of Pegasus Private Investigation. Both Desmond and Jordan are now advertising under false pretenses of not charging parent. Instead they are advertising using an mo of raising money for recoveries. Please do not be fooled by this scamming tactic.

They will never raise money adequately for a safe and successful recovery. Jordan and Desmond now are claiming everyone in this industry takes large amounts of money from parents. This is nothing but an advertising and marketing scam by these jokers and which reputable recovery agencies will vouch for.

Jay worked with Eric Kalmus and Aaron Todd at ABP World Group. ABP World Group no longer exists after Eric was exposed taking over ABP from it’s original founder illegally. An investigation in relation to numerous offences was being carried out by Norwegian Police against Eric.

Fraud Eric Kalmus even recently wrote a reference to Jay’s company ‘Pegasus Child Recovery’, now changed name to ‘Pegasus Private Investigation.’ Says it all really, an absolute circus. Pegasus is now proclaiming to be a not for profit charity raising funds to recover children, all rubbish to attract vulnerable parents to be fooled. Pegasus is not a registered charity in any country.

We have countless messages from Jay himself, confirming he is fully aware of all these individuals named in this blog scamming parents, including that CARI is the only legitimate organisation. He also confirmed that all these frauds try continuously to put down CARI, with false allegations to cover the frauds actions, but here Jay is now associated in partnership with them…. snakes the lot of them.

You see, if we don’t expose these muppets for who they really are, we are just as bad as them for allowing them too do it.

Don’t believe us. Read below just some messages from Jay to our CEO. Jay’s messages in white. Jay wanted to partner with CARI, but after we found out he was dipping his fingers in with the frauds, we immediately cut of all communication with Jay. Every single one of these fraudsters except Donya approached CARI wanting to form a partnership or work for CARI. Every single one of them was refused by CARI: 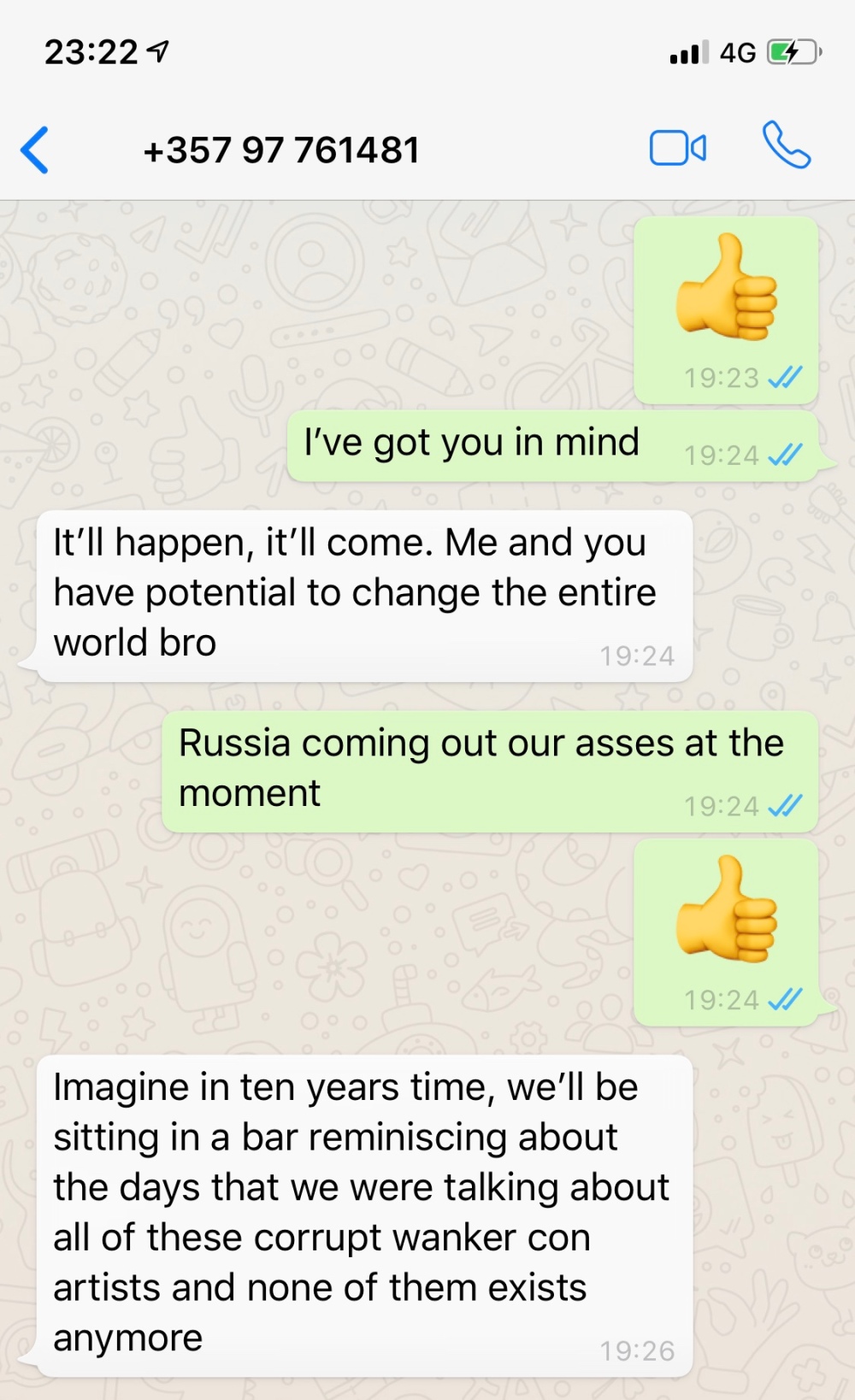 They are all connected and pass vulnerable parents to each other taking their cut. Below is the unregistered and unregulated company both Desmond and Jordan now use: (but you can bet your house on it they will change the name again) 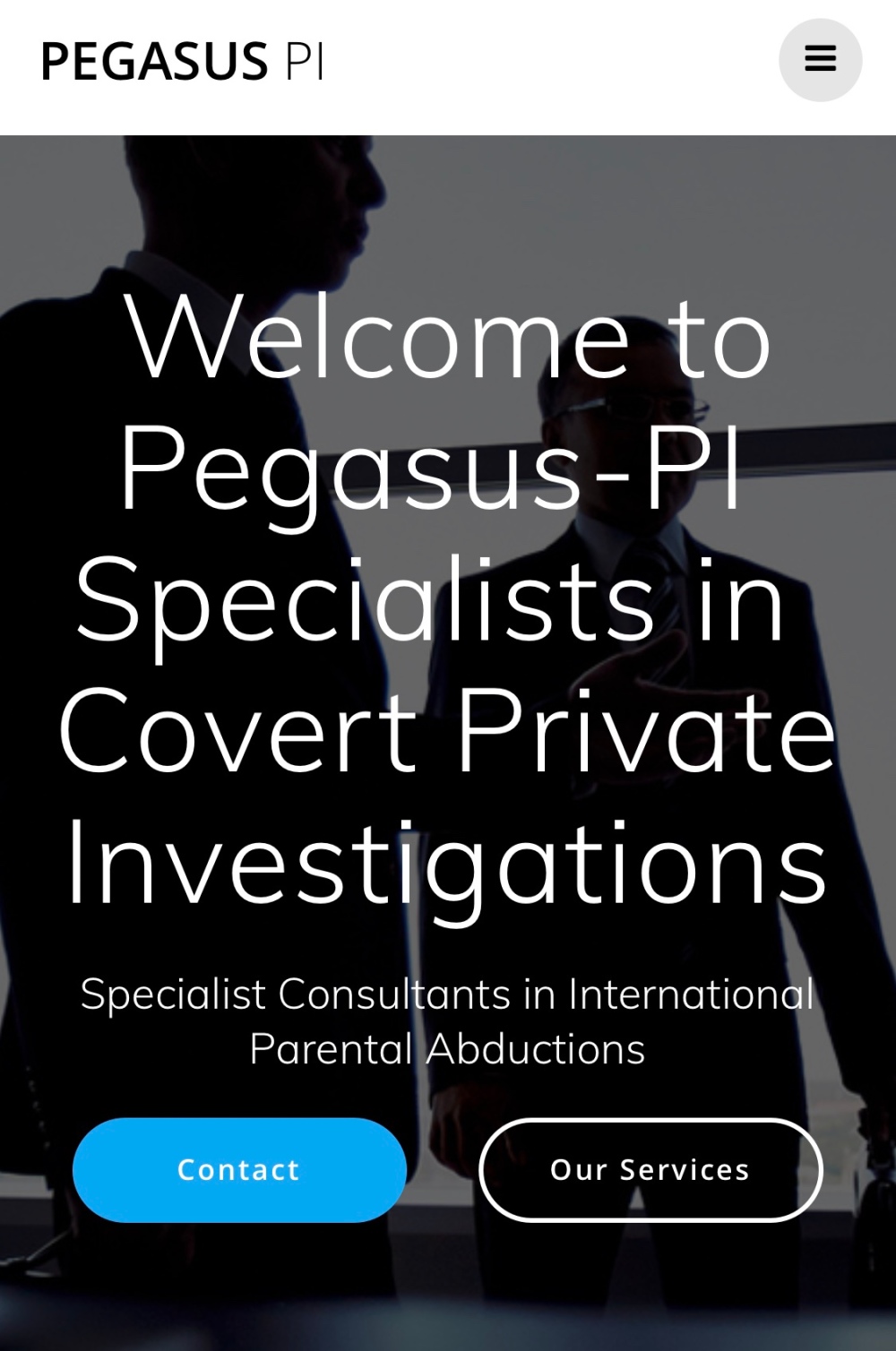 Pat Desmond is posting blogs and running the Facebook page of Pegasus Investigations. Proof below he is connected and still scamming vulnerable parents: 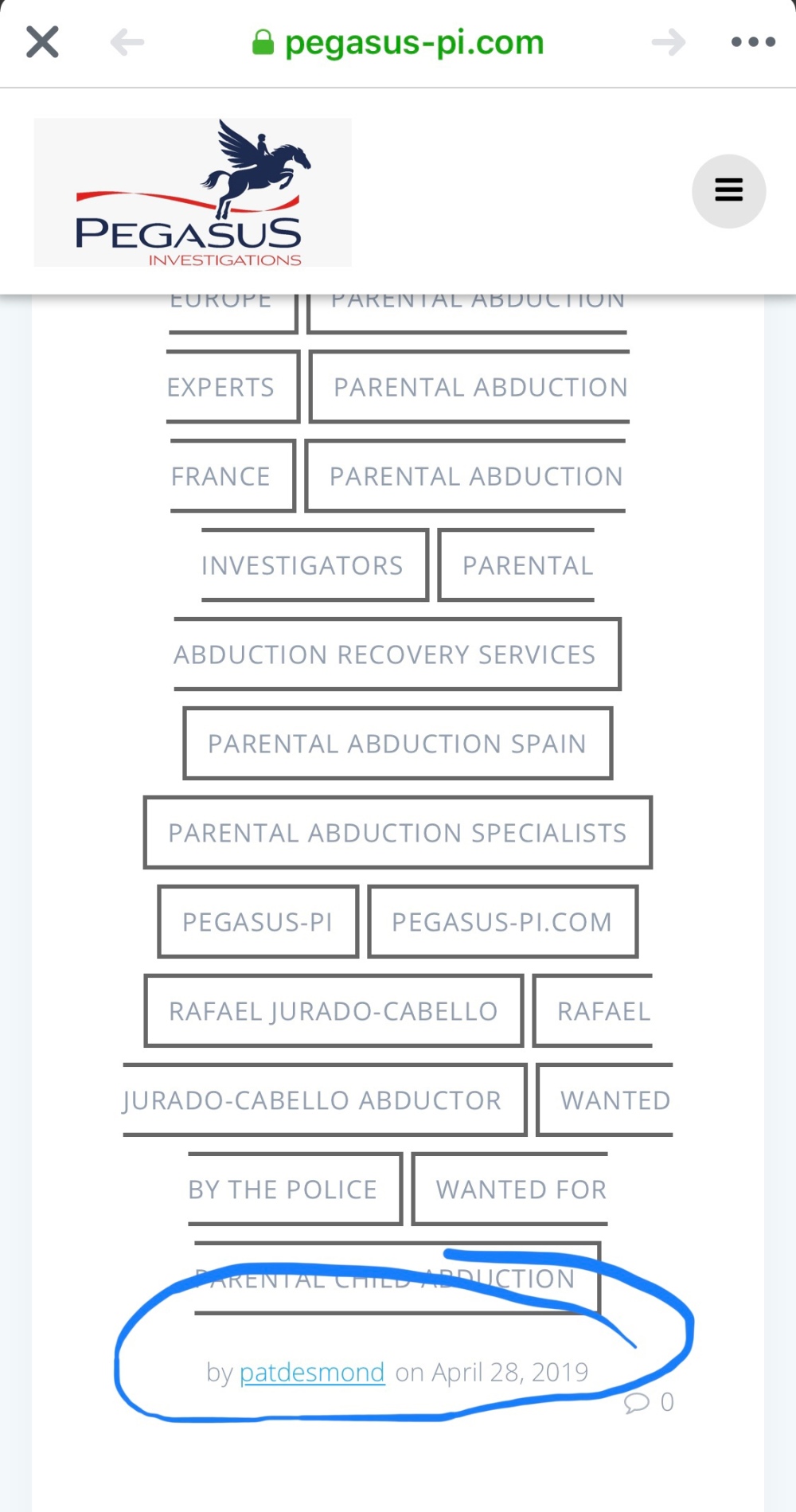 This below is Desmond’s number also associated with CRE.

The number below used by CRE on their emails. Very similar yes!

You will pay a small fee that you think is great and cheap, then he will ask for a bigger amount once he says he’s in the country doing surveillance. If you email CRE and make inquiries about Patrick Desmond, the reply will be Patrick is now retired from child recovery and no longer works for CRE. It’s Patrick Desmond replying to you.

Please read this link from another source who exposed Desmond and his fraud partner Tim Wade. You will read information from a scammed parents attorney https://timwadeinternetconman.wordpress.com/

A true scumbag who has been exposed countless times in the UK after scamming parents. He has multiple business names opened and closed each time he gets exposed he changes company names. He will have you pay into his fake company Lincolnshire Private Investigations keeping his real name Patrick Desmond off everything.

This scammer goes so low as to take parents money then stop all communication and using his wife to tell his victims he has had a heart attack. One very close associate to Pat can also confirm he has never had a heart attack and it was a scam. Pat as he calls himself online, is directly associated with notorious British conman Tim Wade.

They even had a company registered in the UK together. Numerous victims are happy to tell you their story including a Portuguese and two French fathers, of being scammed by Pat Desmond and his fake companies. Countless documentation on this cockroaches scams.

We encourage parents to read these blogs as everything is factual and can be verified with evidence. The sooner this industry is regulated the sooner these scumbags will be unable to scam any more parents. We also know a few so called ‘child abduction advocates’ especially in the U.S who have supported these frauds.

We will not stay quiet until everyone of these scumbags are put away along with their colleague Peter Thomas Senese. No wonder they continue to try and sabotage our recoveries just like Lebanon was….wasn’t it Colin Chapman or create defamatory websites and social media pages to TRY and give CARI a bad name. Colin Chapman has been hiding a darker secret until now… PAEDOPHILE.

Of course we do not state things in public unless it is true and we have seen evidence. As you can clearly see from this part of a report below. This is part of the CPIU interview of Colin Chapman’s sexual abuse to his two daughters, including Saria his oldest, recorded in Nambour Police Station, on the Sunshine Coast.

Some parts below have been blanked out, but if you read carefully you can fill in the blanks, including where Colin Chapman‘s name goes. “Hour long showers with his two daughters, using his penis to show the girls have to clean their private parts. Then he spends up to 3 hours lecturing the girls and demanding his oldest girl Saria, not to tell anyone what they are discussing/doing. The information recorded in the child protection history indicates that there have been significant concerns that (blank) physically abused the child”

We have and continue to update our CARI website. On our homepage we will soon publish again the current frauds names, but here they are again for the record:

Colin Chapman, Eric Kalmus, Donya Al Nahi, Pat Desmond, and Aaron Todd. Each of these frauds has scammed multiple victim parents, after they groom them online, usually through Facebook groups and pages. Once parents pay them to get their children home, they do not leave the safety of their front doors and wouldn’t know how to recover a dead fish from a fish tank, let alone an abducted child in another country.

She has no hesitation recommending these parasites, knowing they have scammed parents.

Soon we will release our blog about our lawsuit in the US against the biggest con man of all…. Eric Kalmus. Some info here https://childabductionrecovery.wordpress.com/2020/04/05/frauds-parental-child-abduction/

Anyone who supports any of these names are just as bad as they are.

We’ll show just how much of a scumbag Eric Kalmus is and show witness statements as well as other indisputable evidence, we and our attorneys have uncovered. Kalmus has the IQ of a cow. It’s going to be a cracker!

Everything stated can be confirmed with undisputed evidence.